A chicken’s needs are few, and pretty simple–yet these are things they MUST have if you are going to keep chickens and not expect to find them horribly killed and strewn about your yard one fine morning.

Coop– Basically a small shed, with some chicken accoutrements such as roosts, food & water containers and nest boxes, secure against predators and vermin.  Used to securely house your chickens at night, during the day as a nesting area.

Run–Protected outdoor space, with a secondary set of food & water containers if needed, safe from predators.

Even if you have a large yard, you may also want to build a run for your birds. Runs are handy if you are going out of town for a few days and want them to be secure, but still have a larger area to roam in, without it being open to predators. Your friend or family member who comes over to feed the birds in your absence will appreciate it, too, so they don't have to worry about getting the birds back into the coop at dusk. Runs are also great for protecting against bad weather.

We have built two coops and runs, one at our old house in southern California, and one at our present home in northern Nevada.  Both were attached to the coop and both have withstood many years of use and weather with no problems, although we had different considerations with each coop as to how to build to withstand very different weather issues, as well as protecting our birds from weather and predators.

Our first run in southern California served us and our birds well for many years.  When we moved to northern Nevada, we had 46 chickens to move as well!  Since our old run was still in great shape, we decided to take the thing with us.  While this was no small amount of work to dismantle, it saved us loads of money and time that otherwise would have went into building a new run from scratch at our now home.

Below is our present coop and run in northern Nevada.  It was built to be much more robust than our old one.

Our new ½ acre property is at 5000 feet above sea level, and this climate is prone to MUCH windier and colder conditions, as well as hot summers–not to mention larger, stronger predators.  We would have to build to protect our birds from cold winds & temps and have something flexible enough to be opened up during hot summers.  We took the prevailing wind direction into consideration, too.  Luckily for us, our new home had two existing sheds in the back of the property.  One of which, the one on the left with no roof, would be perfect for use as a coop.

Only thing was, it was in the wrong place.  It needed to be moved over towards the middle of the yard and back about 20 yards. This was soon accomplished by pulling it loose from it's moorings and dragging it with lots of nylon rope, sheer stubbornness of will and the Jeep. We also rented a trencher and dug the trench for the run posts and the buried wire--vital in areas where predators know to dig under the coop wire to get at your birds.

In this picture the coop used to be on the left where the chunk of plywood is lying on the ground. The framework on the ground is the carport pipe structure that was the old run, moved from the old house.

The run is bolted to the coop building.  The run posts were seated in cement footings, which got a field test with 65 mph winds the very next night. None of it ended up in the next county by the following morning, so we must have done good.

The run roof goes on, just in time for a light snow.

The first course of wire goes up on the right side. We use 1/4 inch welded-wire, also known as hardware cloth--NEVER chicken wire!

A better look at the trench where the wire will be buried at least 6 inches below ground, bent outwards to foil digging predators.

The run roof going up, half the metal roofing on. This was quite harrowing to raise, by the way. It swayed and did the hula in such a way as to have you fearing for your life.

One thing we have here in SPADES is rocks. This area is an old glacier field and when it left, it left all kinds of damned rocks. Dig down two inches and your shovel will hit a rock. Or 12.

The courses of wire are overlapped by about 4-6 inches and secured with UV resistant zip ties, which will seal out rodents that may try to slip between the wire edges. Chickens and their food attract such things.  We did discover the next year that the zipties break down quicker in this harsher weather and need replacing yearly, so we’re planning a more permanent solution.

Because we now live in an area that sees much colder temps and higher winds than where we used to live, we're adding insulation to the walls & ceiling of the new coop. It will also have a barn heater or a heat lamp for REALLY cold nights.  We did our homework and checked the almanac–Mother Nature throws in some REALLY cold winters here and there.

Remember all those damned rocks? They go into the trenches on top of the outward-curved underground wire as an additional digging predator deterrent. JUST TRY AND GET AT MY CHICKENS.

The plywood coop roof is overlaid with tar paper, which will in turn be sealed with Henry's (a cold application tar sealer) and given a final covering of shingles.

The doorway framing is done and the roof goes on the coop.

The trenches are topped off with dirt, and the doorway is framed in!

Time to go inside--this is the coop before it gets insulated.

The insulation goes up...

More wire on the other side, and the doorway is beginning to get framed in...

The next day sees the flock cruising their new digs. Sadly they are confined to the coop & run for now as we still have some fence repairs to do on the rest of the 1/2 acre before we can let them roam it.  The double doors on the coop building can be opened and closed as needed–we leave both doors open day & night in good weather.  On cold days, one door gets closed to cut the drafts from cold wind.  On cold and/or windy nights, both doors are closed and the barn heater run as necessary.

We also added, come summer, a set of burlap feed bag curtains lining the outside of the hardware cloth at chicken level, ziptied to the wire.  These provide great ‘swamp cooler’ type evaporative cooling on hot days, all you do is hose them down.

...and the walls are then sheathed with plywood. Except for finishing touches, the coop and run are finished, yay!

The door goes on… 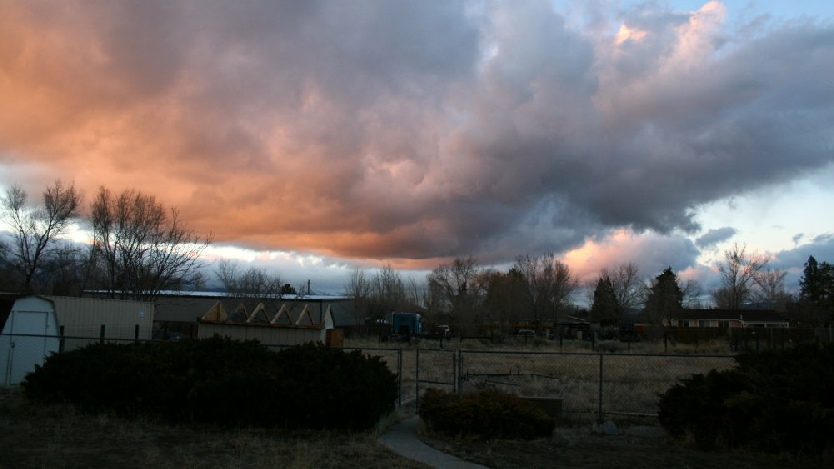 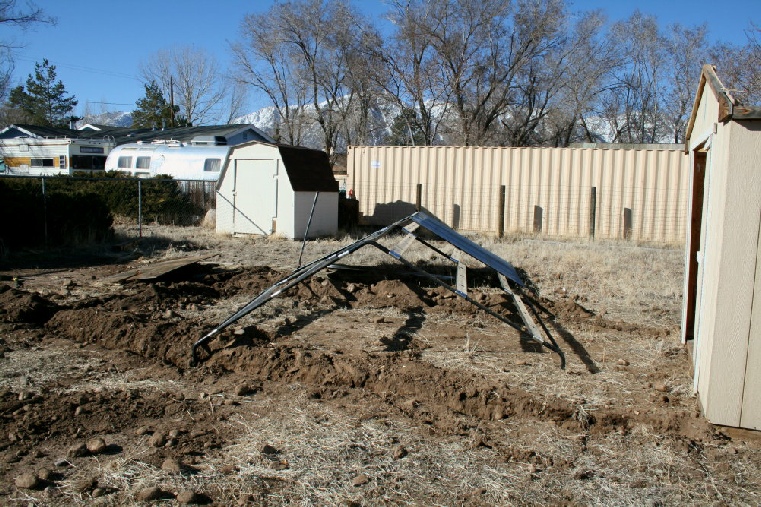 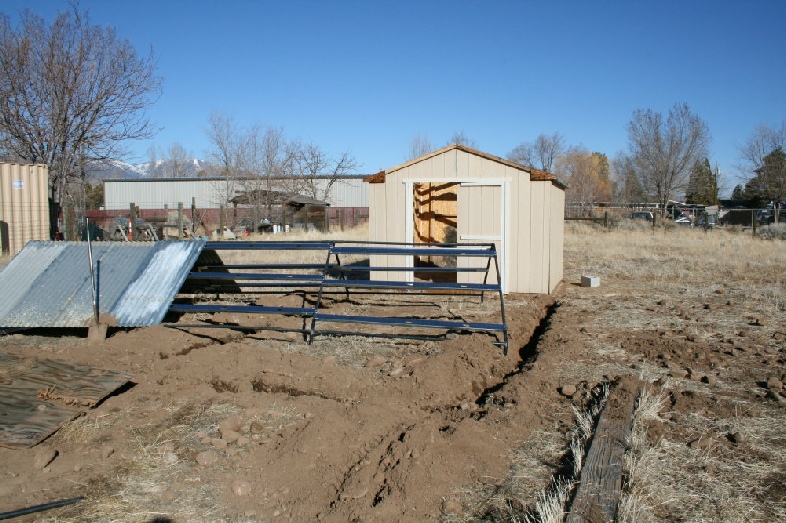 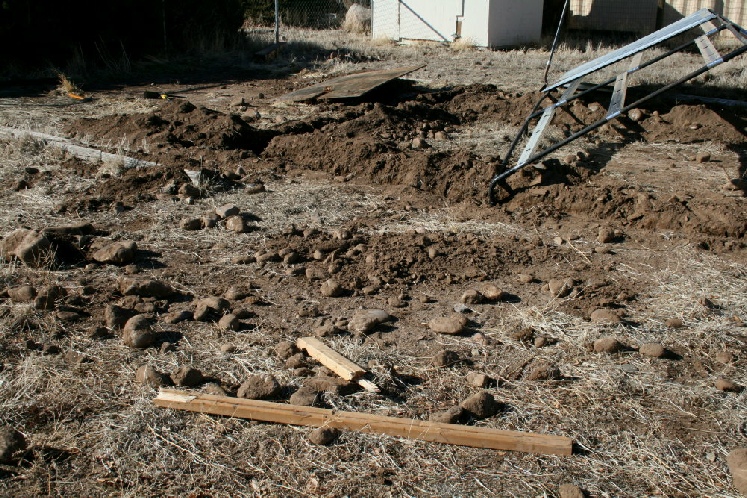 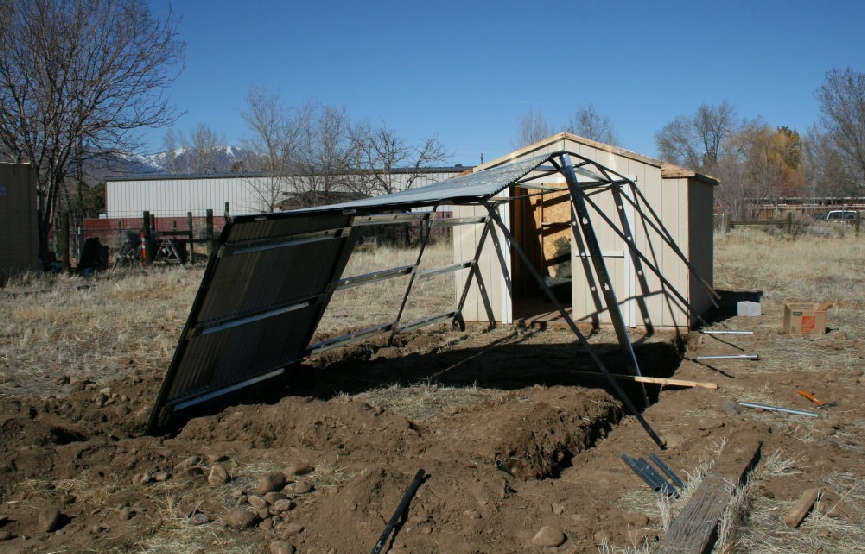 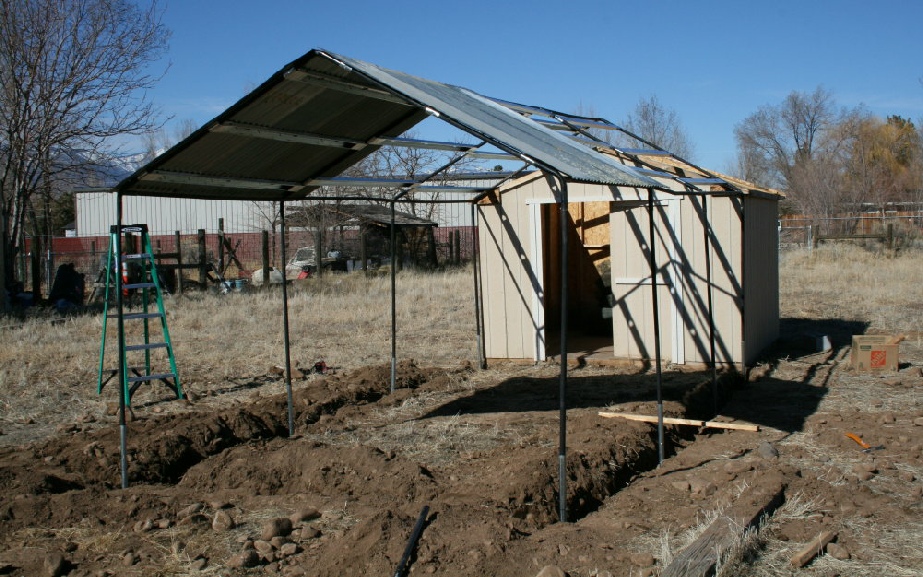 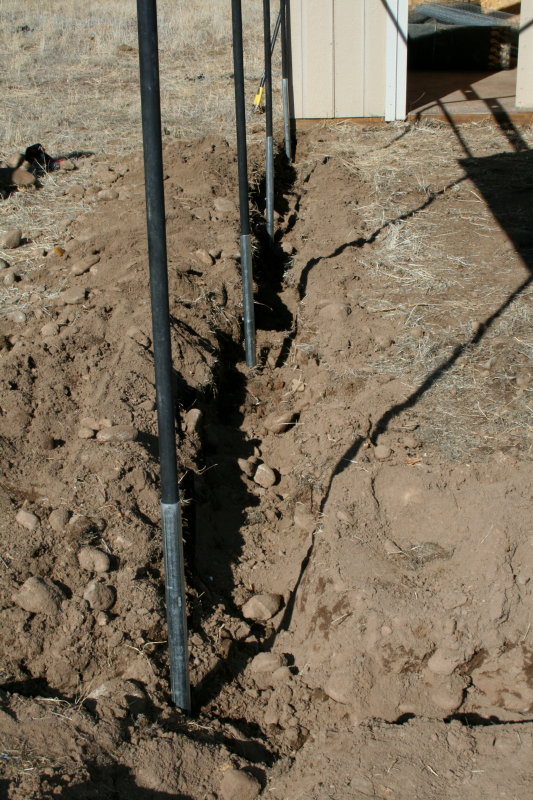 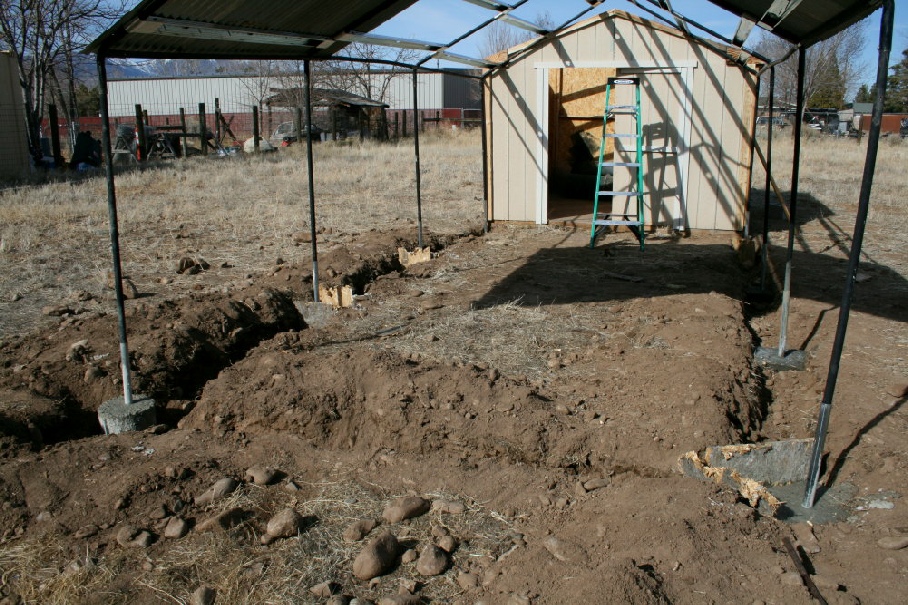 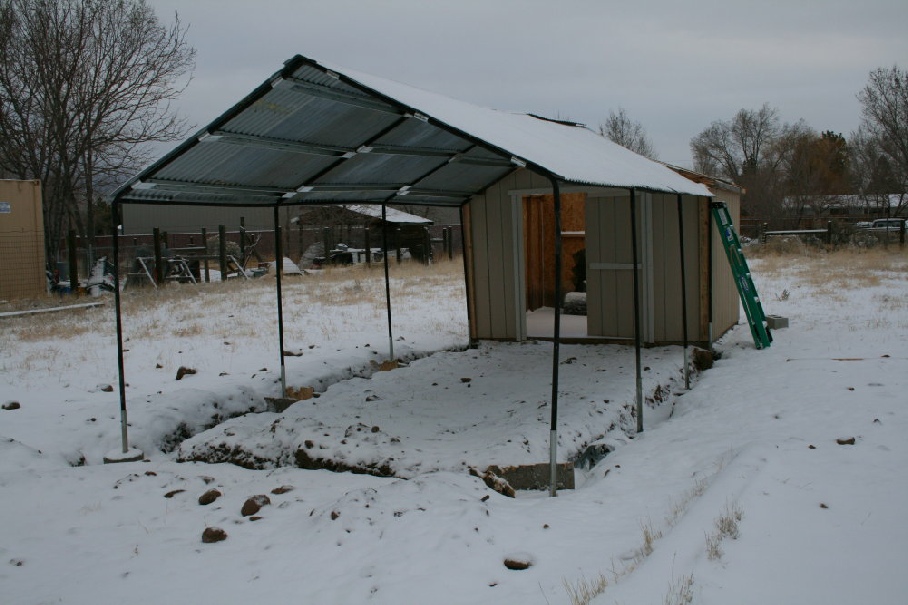 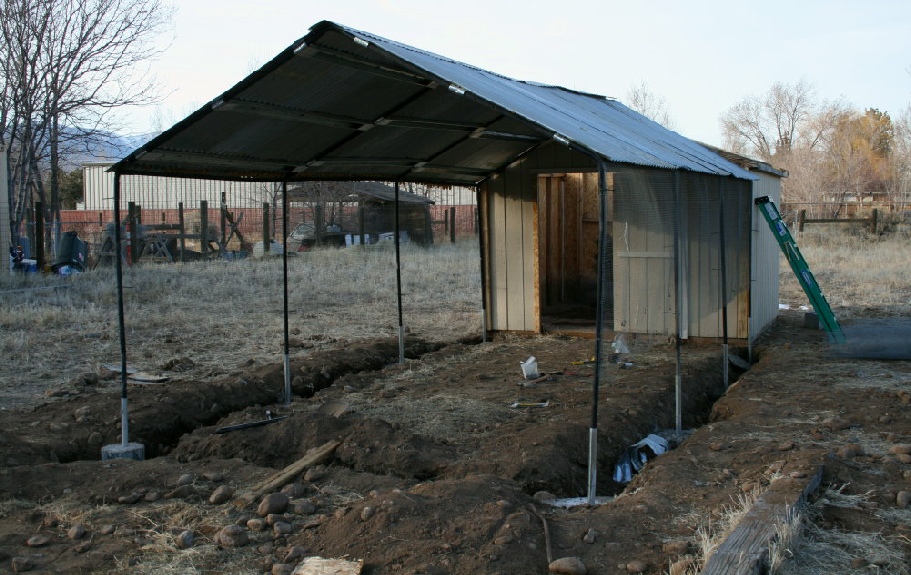 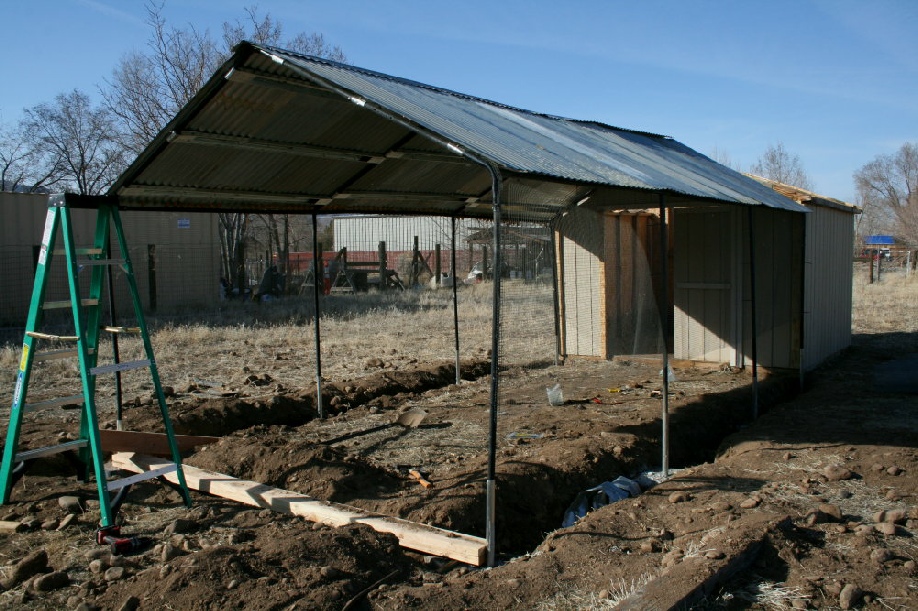 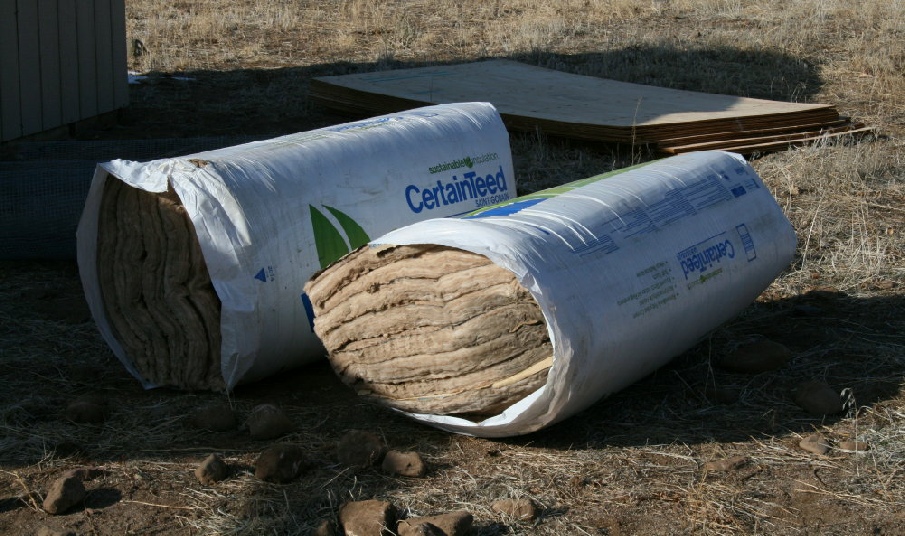 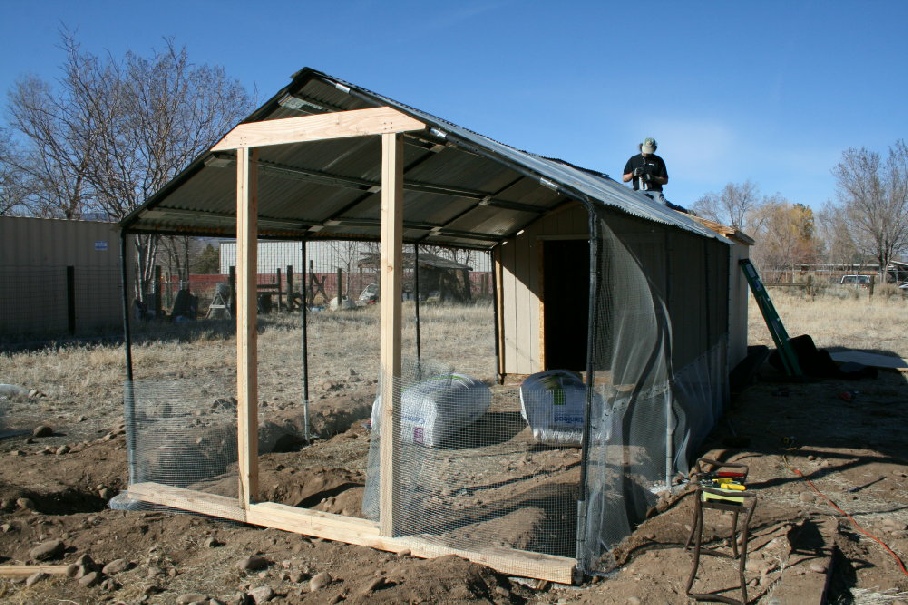 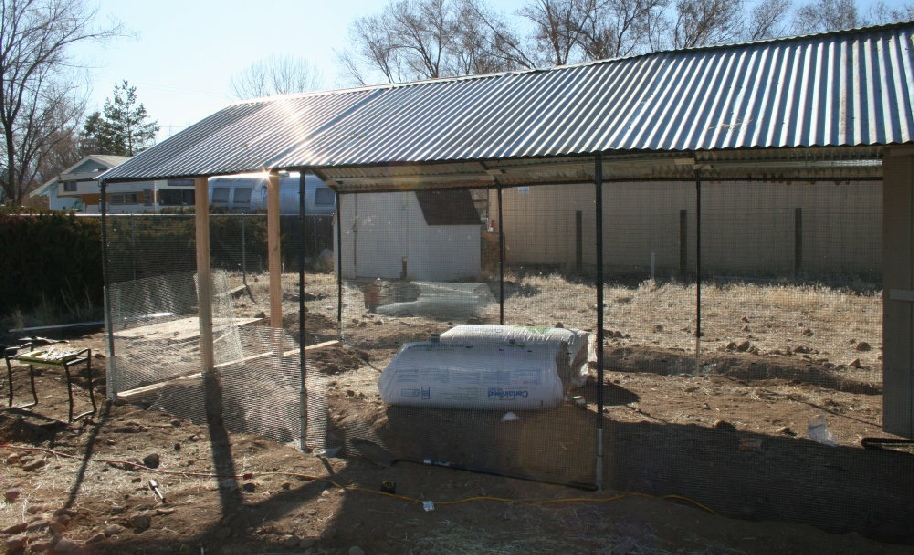 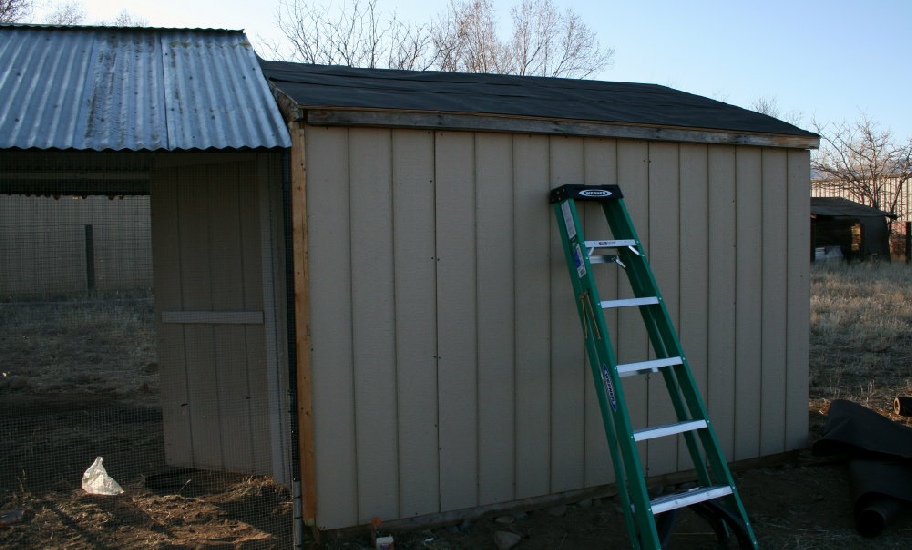 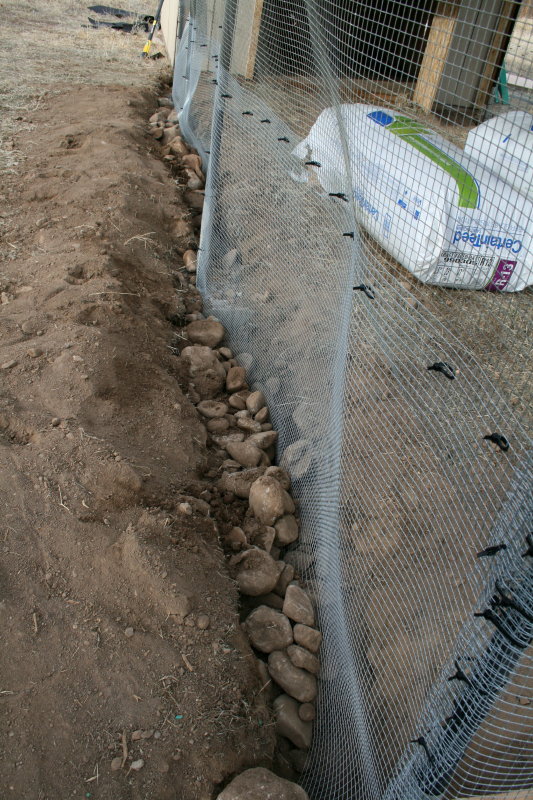 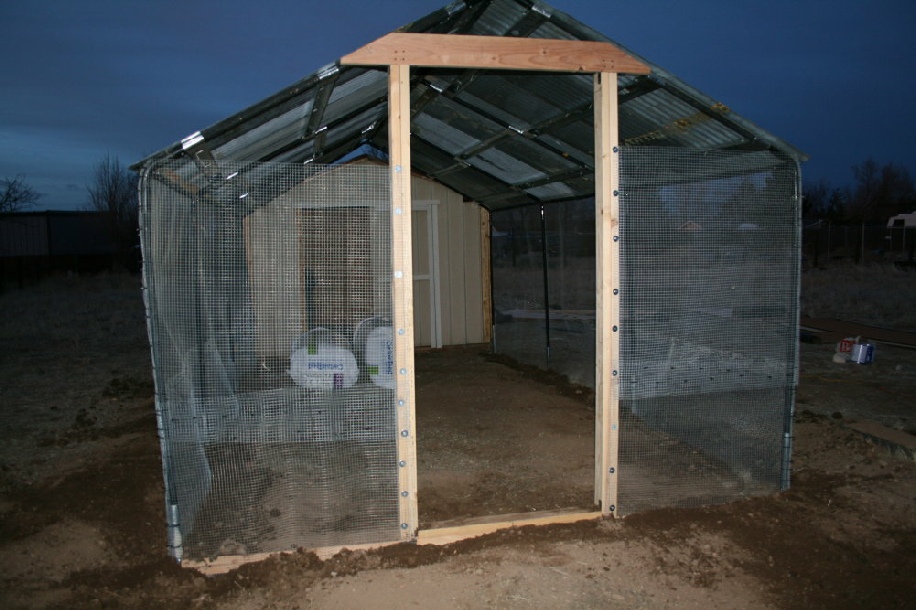 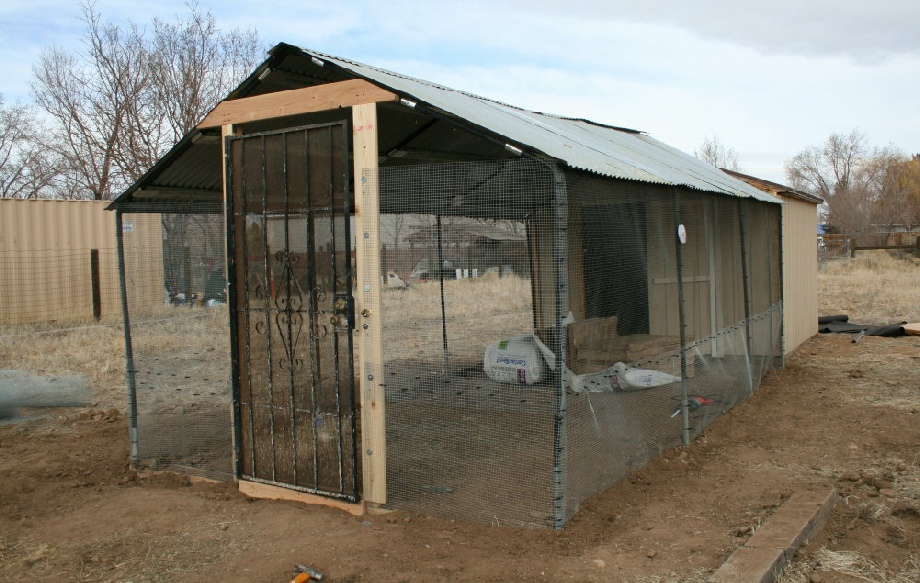 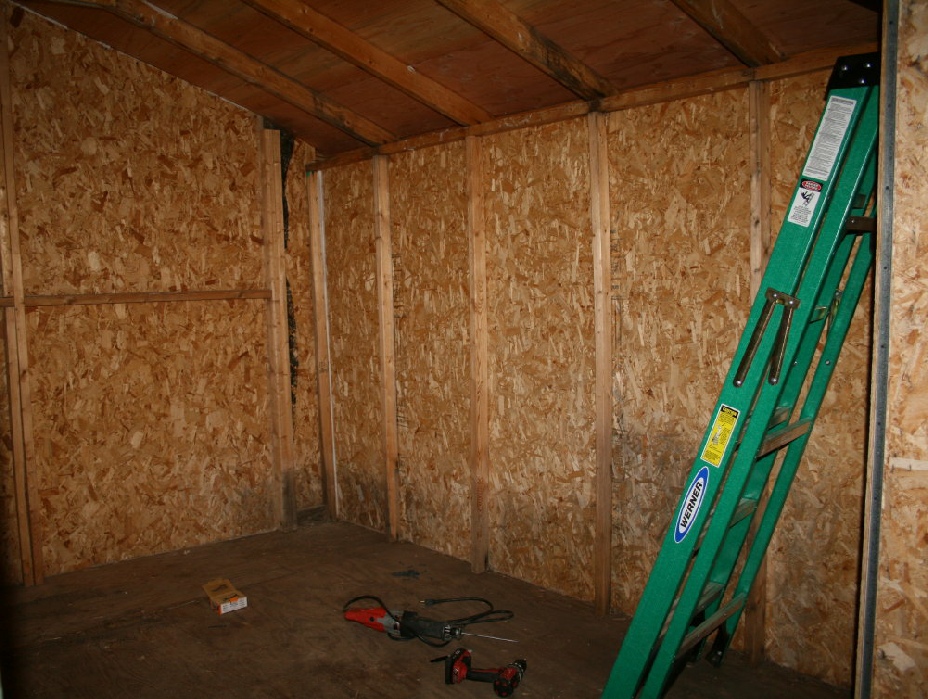 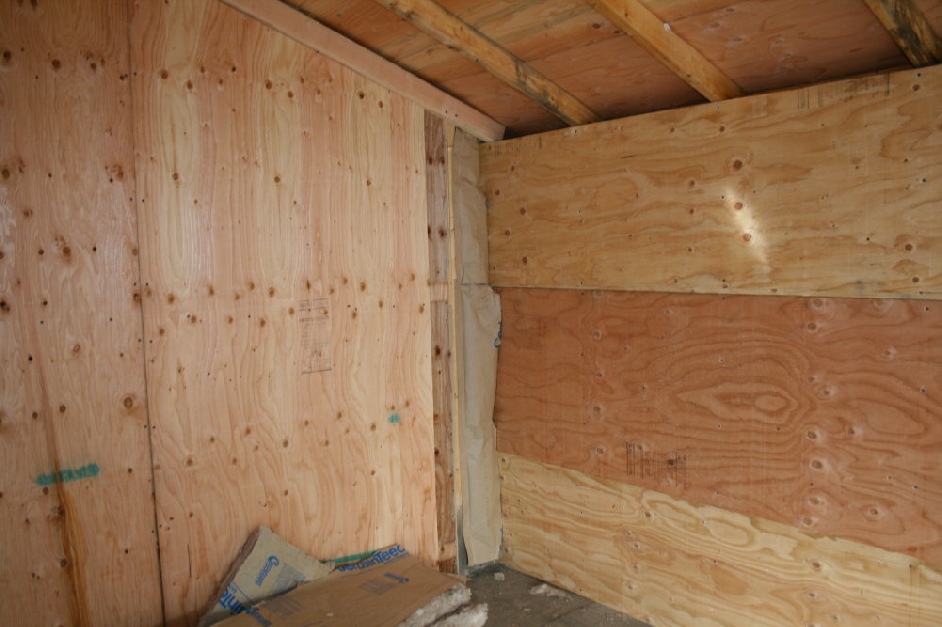 Because we, just like everyone else, still fall victim to Chicken Math, or Morehens Disease (we’ve learned to stop struggling and embrace this) after all these years, we planned all along to have secondary runs (yes, plural, we’ve truly admitted that we are powerless before fluffy chicks).

So after the main run was built, we added a day spa on for youngsters not ready for the main flock, injured birds, that kind of thing.

Notice I called it a ‘Day Spa’–this run we built quickly and it was NOT fortified with below-ground wire like the main run is yet.  Therefore it is a daytime only pen for now, until we go back in when it is empty and finish building it right.

We expect to have the time to finish this pen off properly this coming Spring once other, more pressing house & garden projects are completed.  It will also have it’s own nest area, roosts and small coop.  Meanwhile, here is the day spa. 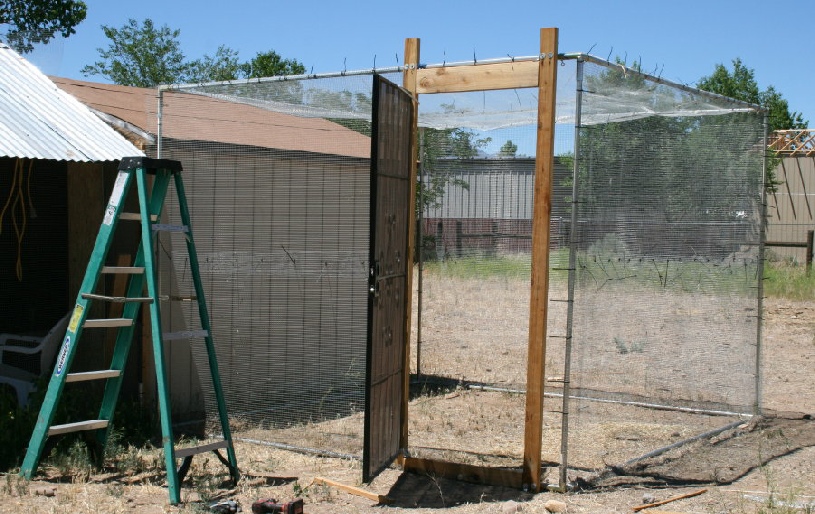 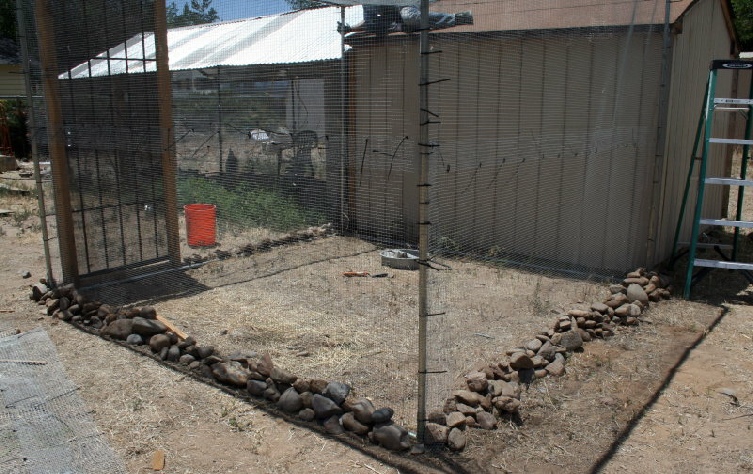 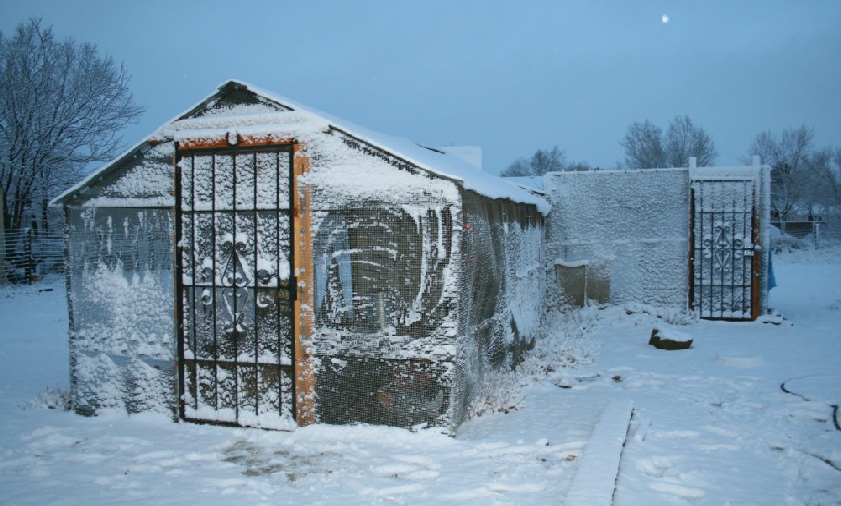 The Chicken Facility Complex.  Secondary run built quickly, but is sturdy enough for temporary daytime use.

The Chicken Facility Complex in winter.

‘Waaaiiiit a second,’ I hear you say, ‘WHERE DID THE SECOND RUN COME FROM?!’  You’re right, you sharp-eyed thing, it wasn’t there before.

Which brings us to… 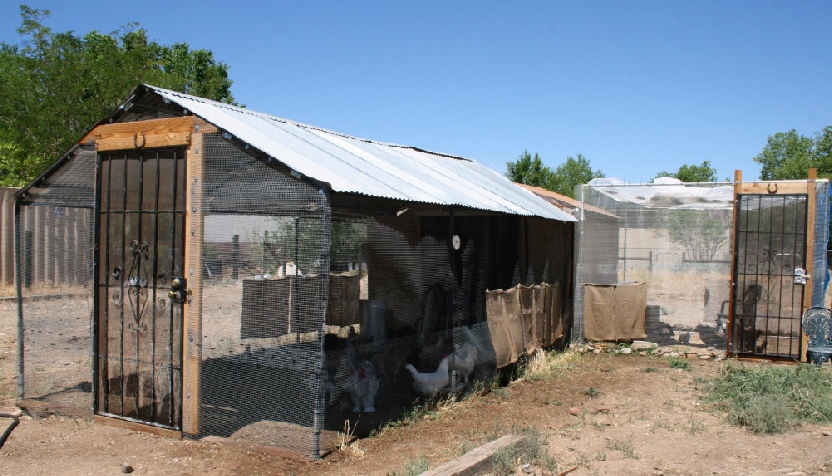 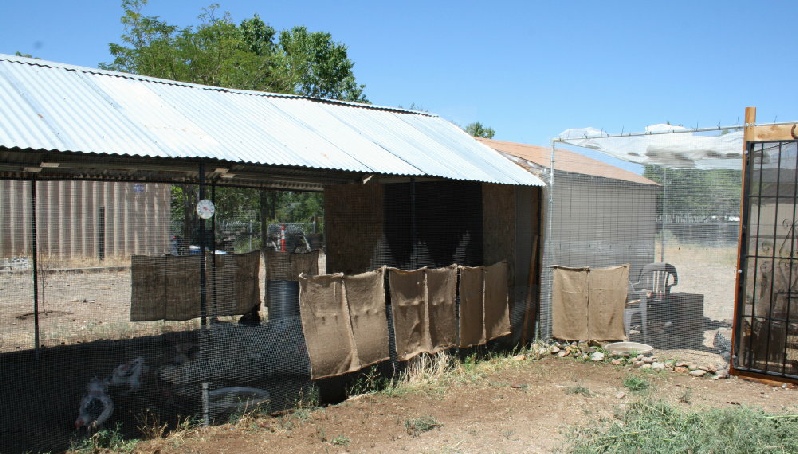 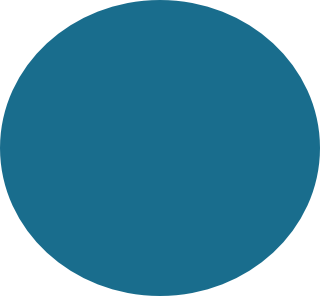 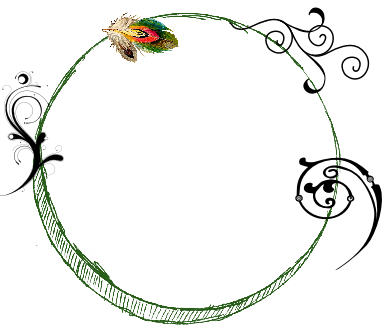 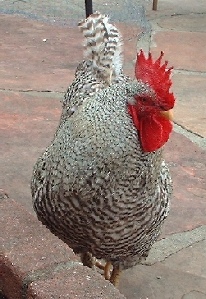 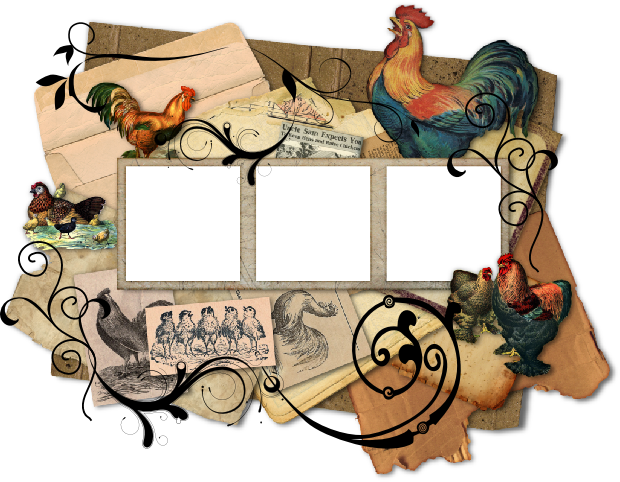